I bought some tortilla wraps in an effort to wean myself off the big chunks of sourdough that I’ve been demolishing. Of course I’ve swapped one addiction for another and now I can’t stop eating the wraps, but on the positive side I have found a lovely way to eat them for brekkie.

A quick fry and shake of spice and they give out a lovely aroma and are delicious with some warmed fruit and yoghurt, nacho style. 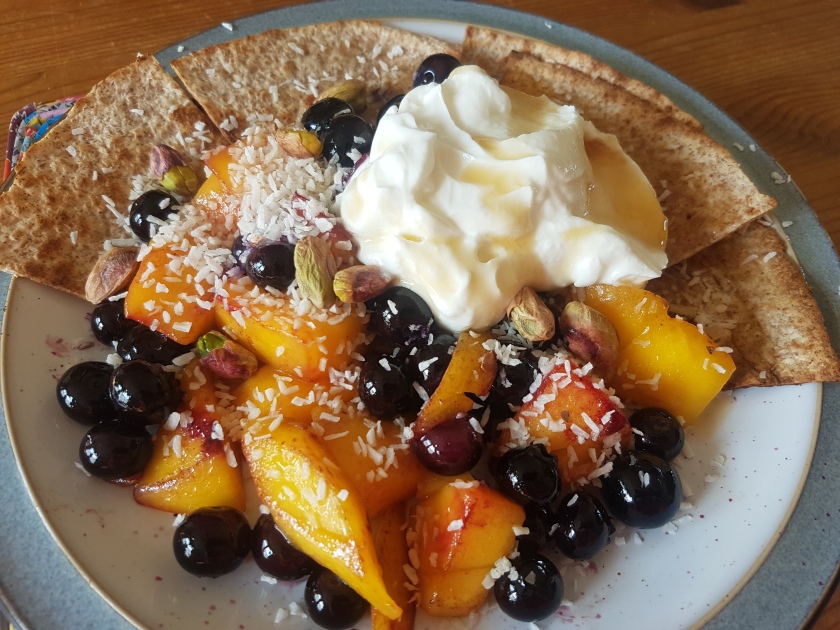 Cut the tortilla wrap into 8 triangles. Melt a teaspoon of coconut oil in a frying pan and add the triangles, then sprinkle them generously with some cinnamon.  Cook until the tortilla slices start to show some bubbles (around 3 mins) – then turn over and cook for another couple of minutes. Arrange on a plate.

Add the other teaspoon of coconut oil to the pan and throw in the fruit – stir fry for 2-4 minutes until the blueberries are getting soft.  Then add the fruit to the plate, add some yoghurt and sprinkle with some coconut and pistachios.

Runner and avid breakfast eater View all posts by thebrekkieblog