This was inspired by an Yotam Ottolenghi barley and orange pudding. I thought it had breakfast written all over it, so I played around and made it more breakfast than pudding.  The barley does take a while to cook, so it’s worth making it the day before and then just warming it up in a pan with an additional glug of milk to soften it up again.

This has a much more ‘bitey’ texture than normal oat porridge, in fact it probably isn’t really a porridge at all, but the cooking and serving is similar so I think I can get away with it.  It also has more protein than oat porridge, and that has to be a good thing.

In a saucepan put the barley, sugar, vanilla pod (scrap out the seeds and add these and then add the remaining pod as well), milk and the grated zest of the orange.  Bring to a boil and then simmer for about 50-60 minutes.  Keep checking in case you need to add a bit more milk. The barley should keep some of its bite.

Then either eat straight away and add your toppings, or cool and put in the fridge overnight.  Remember to take out the vanilla pods before eating.

Melt a bit of coconut oil (or other oil) into a small pan and add some orange segments and a bit of brown sugar.  Heat for a couple of minutes to soften and caramelise the orange.

Yesterday I picked my first stick of rhubarb from the allotment. I have 3 plants and they are all growing really well again this year, so lots of rhubarb ahead for me and lots of experimenting to be done.  This porridge is really simple and made in one pot – no extra stewing or cooking of rhubarb.  You can vary the sugar based on your preference or leave it out completely for a slightly sharper taste.  Personally I love porridge with a bit (sometimes a lot) of demerara.

Put all the ingredients (apart from the blueberries) into a saucepan and bring to the boil.  Simmer for 5 or so minutes until the rhubarb has gone soft and starting to mush into the mixture.  Turn off the heat and stir through the blueberries – this ensures they keep their shape and just soften a tiny bit.

Serve with an extra sprinkle of demerara sugar for that added crunch.

I will admit I’m usually very disappointed with hotel breakfasts so on a recent trip when I ordered porridge  I didn’t have high hopes. But what arrived was the most delicious creamiest porridge I’ve ever had.  I checked with the chef and the star (and only) ingredients were oats, cream and full fat milk.   For me that’s far to decadent to repeat too often so I’ve been playing around with a slightly healthier version using coconut cream and coconut milk. If you like coconut and you like porridge – you are going to love this.

Put the oats into a pan and add the coconut milk – bring to the boil, then turn down to a simmer and add the coconut cream.  Simmer for 3-4 minutes. Add a splash more milk if it starts to stick.  Just before serving mix in the desiccated coconut.  Serve with some more coconut sprinkled on top.

You really don’t need to add anything else – but if you must pistachios are a great match. 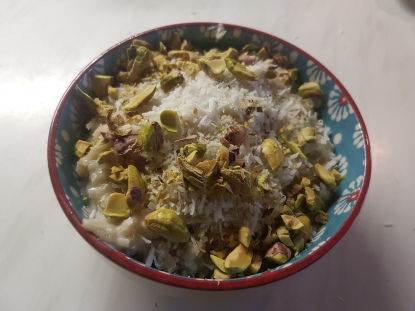 This mornings dog walk was freezing and I got home needing coffee and hot food. So why not combine the two?  Hence my new favourite porridge – vanilla latte style. I tried to keep as close as possible to the style of latte I would usually order – which is a skinny latte. Personally I prefer cows milk in coffee, but whatever milk you normally have should work just as well.

I did prefer the porridge with some sugar (which I don’t normally have in coffee) – I think it needs something to give it a sweet hint and I do believe that the best match is brown sugar – can’t beat a bit of demerara. 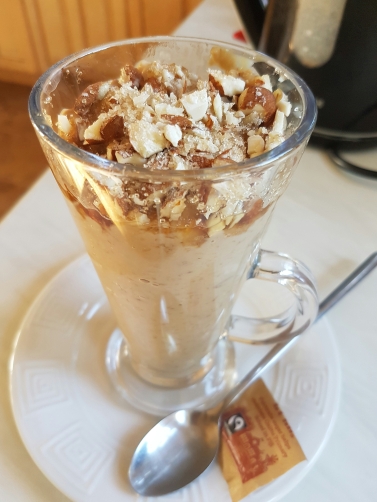 Put the oats and milk in a pan and bring to the boil. Turn down the heat and add the vanilla essence and the espresso.  Simmer for 5 minutes or so until the porridge reaches your preferred consistency.  Add sugar and mix in whilst still on the heat.

Serve with some sugar sprinkled on top and some crushed almonds.

It’s taken me a while to try this, I was intrigued with the thought of adding courgette to porridge.  The term Zoats comes from the alternative name of Zucchini (I guess calling it Coats doesn’t really work)

I have no excuse for not trying it sooner, it’s not like I’ve been short of courgettes. Now I wish I hadn’t waited so long because it’s another great way to incorporate veg into breakfast.

Grating the courgettes is key, it means they nicely soften and blend with the oats without really adding any taste, to be honest I couldn’t taste that I had courgettes in my porridge, I could just see them!

I added pumpkin seeds and flaked almonds and sweetened the porridge with maple syrup but there are loads of different combinations to play with, I’m hooked.

Put the oats, courgette and milk in a pan, bring to the boil and simmer for a 3 – 4 minutes (you may want to adjust the milk depending on how you like your porridge).

Stir through the seeds and almonds and then drizzle over the maple syrup.