So to celebrate the start of Wimbledon fortnight there has to be strawberries.  Whilst I love my strawberries cold and fresh (preferably with ice cream) on a damp wet and slightly cold summer morning having them warm seemed more appropriate.

Heat the oil in a pan and add the strawberries – cook gently for 3-4 minutes until just going soft and a bit squishy.  Turn off the heat and stir in the chopped mint. I added a few extra whole mint leaves to serve.

Lovely served with a cream cheese bagel – I love mopping up the minty strawberry juices with it.

A lovely way to use fresh rhubarb. The muffin mixture seems quite dry but the rhubarb releases it’s juices during cooking and these muffins turn out to be surprisingly moist.  You could use other flours, but I think the spelt flour complements the tart rhubarb really well.  These are great on the go breakfast snacks – and freeze really well. They are also fab with some yoghurt or crème fraiche and some extra berries or banana on the side. 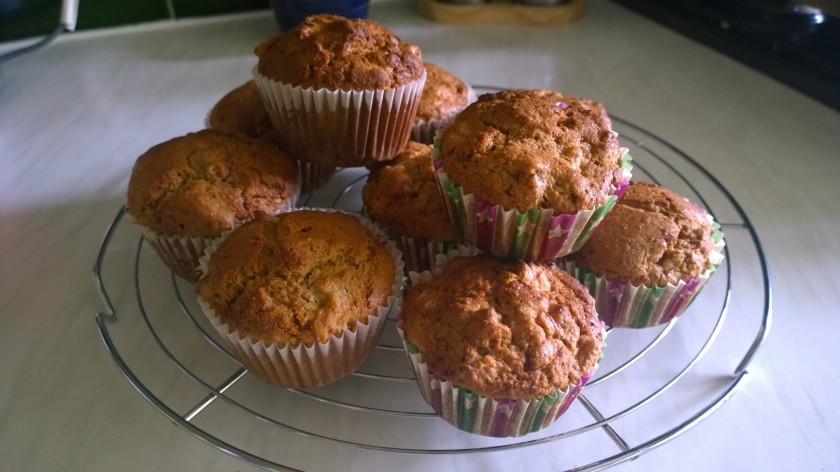 They keep for a couple of days – or freeze them individually. 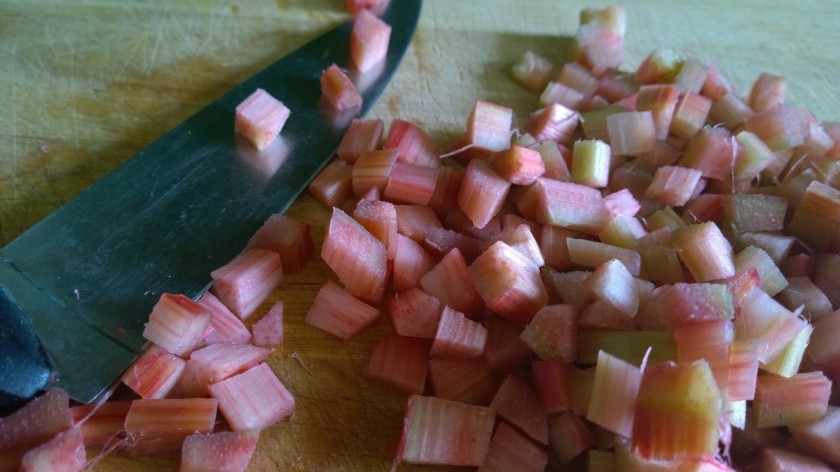 The glut continues and I’m still playing with rhubarb.  These bites are very moreish with a texture of a soft flapjack – but without the added sugar.  I’ve made flapjacks in the past using raw rhubarb, which works very well but for these I stewed the rhubarb first and this brings a softer texture and helps to bind the oats without the need for too much oil.

I’ve been eating these for the past two days – they are also good with a bit of full fat Greek yoghurt on the side for dipping.

Put all the above in a saucepan and bring to a simmer – simmer for around 4-5 minutes until it’s starting to go mushy. Leave to cool.

Mix all the ingredients together and then stir in the stewed rhubarb.

Line a baking dish with baking paper and put the mixture into the dish and mould it into a 20cm x 20cm square (roughly speaking).  It takes a bit of squishing down with your hand and/or a wooden spoon.

Divide into 16 squares before putting in the oven – use a sharp knife to cut through the mixture but don’t separate the squares.

Take out of the oven and run your knife along the cuts again – don’t try and separate or take out of the tin.  Leave to cool in the tin before removing.

They do last a couple of days in an airtight container – that’s if you can stop eating them.

I’ve just returned from a holiday in Vasiliki in Greece and this smoothie was the smoothie of the day at my hotel.  I had it on my first day and then asked what the smoothie was the following day – it was the same smoothie every day because this was the one everyone liked best!  I’ve tried to recreate it at home to bring back some sunshine to a rather damp and dull morning.  It’s simple, fresh and sunny.

Blend it all together.

I’m still happily ploughing through my stash of stewed rhubarb and this is such an easy pot to put together.  The combination of the sharp rhubarb with the sweet strawberries is lovely and a huge dollop of yoghurt brings it all together.  A very easy, healthy brekkie.

Mix the rhubarb with the chia, linseeds and oats and put overnight in the fridge.  In the morning layer up with the strawberries and top with yoghurt.