I love Jaffa cakes, the mixture of chocolate and orange is one of the best flavour combinations. I’ve recently  run a few trail events where Jaffa cakes have been available at the drinks stations alongside the gels and I have been nicely fuelled by Jaffa power.  I’ve been trying to recreate that Jaffa taste in a slightly healthier way.

I first discovered the joys of orange puree during a patisserie course last year and it’s fabulous for adding a really strong orange hit.  There is a bit of preparation the night before due to having to boil the oranges and make the puree, but it’s really easy and worth it.  The puree also freezes really well.  I freeze it in ice cube trays or small ramekins so it’s portioned ready to use.  So instead of boiling one orange at a time I boil 2 or 3 and freeze the leftover.

To make the orange puree

Put 1 or more whole oranges in a big pan of water, bring to the boil and then simmer for around an hour – they should feel very soft when ready but still intact. Drain them, cut them in half and let them cool. When cool blitz them in a processor – skin and all. This is your puree.

Mix all the ingredients together in a bowl, cover and leave to soak overnight.  If you want a slightly wetter bircher add an additional tablespoon of almond milk over the mixture before putting in the fridge.

Before eating I like to sprinkle a few more cranberries and cacao nibs on top.

This is another most delicious brekkie that tastes soooo much better than it looks.

As it’s the start of the Easter holidays my thoughts turn to chocolate.  I discovered the joys of mixing quinoa with chocolate after finding a recipe by the blogger Chocolate Covered Katie and was intrigued about what it might taste like.  It was delicious and has become a firm favourite for breakfast and my favourite way to eat quinoa.  I’ve tried various combinations of milk, fruit and flavourings and i’m sure other versions of chocolate quinoa will feature on this blog again very soon.

I find when cooking with quinoa that the liquid can go from looking like too much to practically disappearing within seconds – so do keep an eye on it.

This isn’t the prettiest bowl to look at but don’t be put off, it really is a taste of healthy chocolate and protein for breakfast. 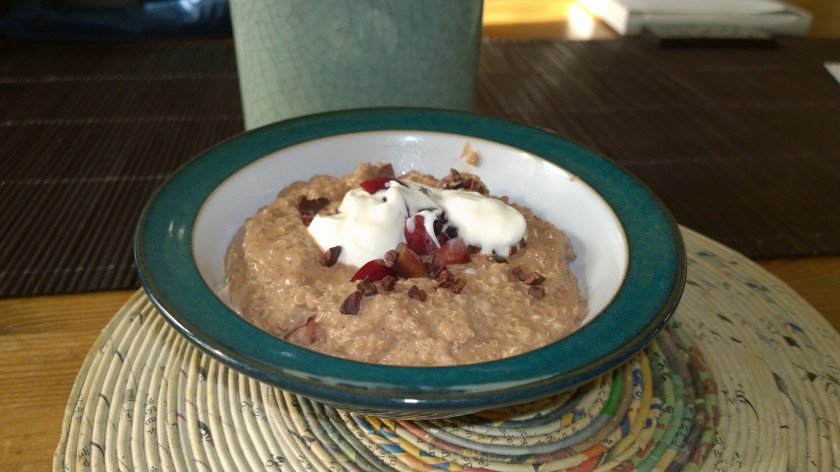 Put the quinoa and milk into a pan and bring to a boil. Turn down and simmer for 15-20 mins – you want the quinoa to be really well cooked and soft. Keep an eye on the liquid and add a little more milk if it looks like running dry.

Once cooked, stir in the cacao powder, vanilla essence and 1 tbsp of yoghurt. Stir for a few seconds before turning off the heat.  Stir through the chopped cherries.

Serve with the topping.